Dogs of war are a special breed of warriors and soldiers who are fearless and ferocious in their attack and are renowned for their courage, loyalty, and devotion throughout the world. These are four-legged warriors who have been going into battlefields since the ancient times and are rightly referred to as the man’s best friend.

The use of dogs in war is not new. Since the earliest days of recorded warfare, man has employed dogs as combatants or in direct support of combat operations.

‘War dogs’ were utilized by Greeks, Persians, Egyptians, British and Romans in ancient times. They were deployed mostly in a sentry role but sometimes they were taken into battle. Dogs were first used in war by Alyattes of Lydia against the Cimmerians in 600 BC when the dogs killed some invaders.

In mid 7th century BC Magnesian horsemen, in a war against the Ephesians, were each accompanied by a war dog and a spear-wielding attendant. The dogs were released to breach the enemy ranks, followed by a spear assault and then a cavalry charge. War dogs were often sent into battle with spiked collars and coats of mail armour. Dogs were used by the Romans during invasions to hunt out local guerrillas who resisted the Roman invaders.

Caesar’s invasion of Britain was opposed by Celtic warriors and their dogs in 55 BC, the English Mastiff is one of the oldest recorded breeds. Attila the Hun used giant Molosser dogs in his military ventures. Armoured dogs were also utilized by ancient armies to defend their position or for attack purposes. Their key role was to distract soldiers and unseat horsemen. Mastiffs and other large breeds were used by the Spanish conquistadors against native Americans in the 1500s. Elizabeth I used dogs against the Irish in 1580 while Frederick the Great and Napoleon both used dogs as messengers and as guard dogs during their campaigns. 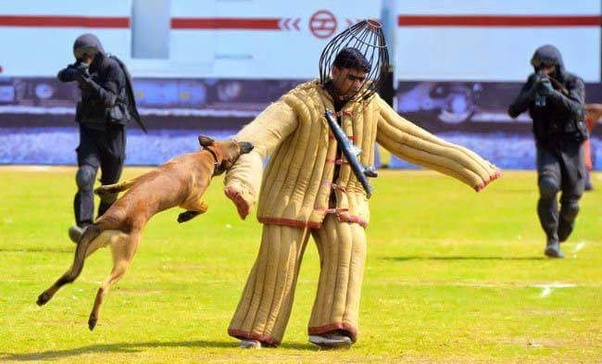 During World War I, the American Sanitary Corps used dogs to locate wounded soldiers. The two world wars saw the use of dogs to detect mines, explosives, booby traps, and also locate camouflaged enemy snipers, in addition to using them as messengers. But it was the Soviets who in World War used dogs effectively as anti-tank weapons, with explosives strapped to their backs. Anti-tank dogs were used extensively by the Soviets during 1941–1942 against the German tanks on the eastern front in World War II. According to reports, some 40,000 dogs were deployed by the Soviet Army, mostly for anti-tank operations. 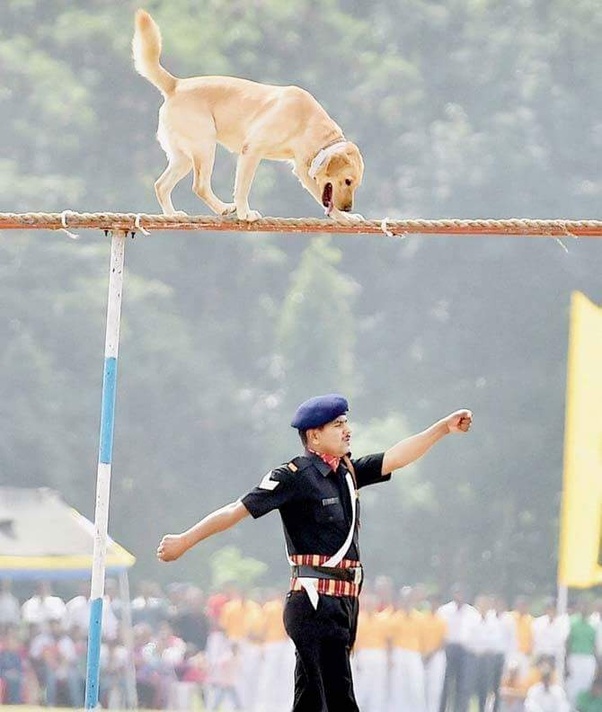 Dogs also jumped into combat alongside British Paratroopers on D-Day in World War-2 where they together fought the German Armies. In Modern, Warfare Dogs have served primarily in explosive detection roles in Iraq, Afghanistan, and Kashmir. Dogs are also trained to engage directly with the enemy as part of special forces assault teams.

U.S. Navy’s SEAL Team Six during Operation Neptune Spear in Abbottabad, Pakistan on the night of May 02, 2011, had Cairo in their team which was a Belgian Malinois dog. Cairo was entrusted with detecting bombs, concealed enemies and even detect secret doors or passageways. Cairo was held-dropped into the compound with the other DEVGRU Operators and played a key role along with his teammates secure the perimeter around the dwelling.

In the art of modern warfare, the role of dogs has changed from attack to other roles like

Indian Army association with dogs is old. Army dogs were pressed into service for the first time in the middle of 1959. With the encouraging performance shown by the first batch, they were deployed on a large scale. A war dog training school was raised on March 1, 1960, at Meerut. Remount and Veterinary Corps (RVC) Center and College imparts Basic and advance training to dogs and their trainers on specialized jobs like explosive detection, mine detection, tracking, guarding and assaulting. The Remount and Veterinary Corps (RVC) is one of the oldest services of the Indian Army, carrying the motto ‘Pashu Seva Asmakam Dharm’. The Remount Veterinary Corps (RVC) has been entrusted with the responsibility to procure, enroll, train and deploy Army dogs, which are imparted rigorous training, depending on their breed and aptitude. After that, they are placed in one of the numerous categories such as tracker dogs, guard dogs, infantry patrol dogs, mine detective dogs, explosive detective dogs, avalanche rescue dogs and so on. 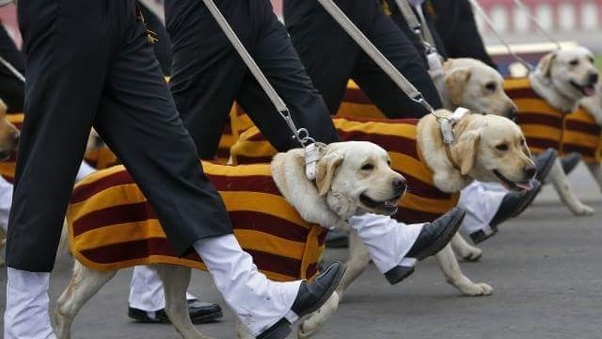 These trained dogs are deployed in various operational roles in J&K, Northeast as well as LOC. They are also entrusted with the task of providing security to VIPs and guarding vital defence installations. Many of the elite Army dog units have excelled in a large number of operational missions, numerous dogs along with their handlers have even received awards like Shaurya Chakras, Sena Medals and Chief of the Army Staff’s commendation cards in recognition of their exceptional performance. 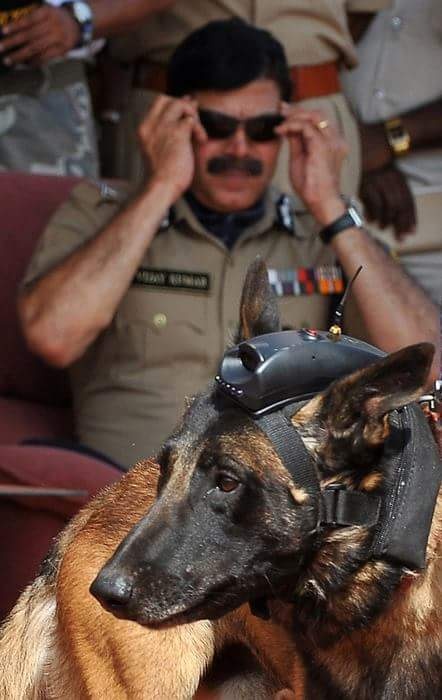 There are around 1200 trained dogs in Indian army at present. These are mainly foreign breeds like German Shepherds, Labradors, Belgian Shepherds and Great Swiss Mountain dogs which are trained by Remount and Veterinary Corps (RVC), but now the army is inducting indigenous dog breed known as the Mudhol Hound. A Lean dog with long legs, the Mudhol Hound belongs to the family of sighthounds, meaning that it depends on its keen sense of sight to hunt and chase prey. This hound has the ability to run swiftly and sniff suspected items, with its speed and swiftness as well as size it can be a good guard dog. 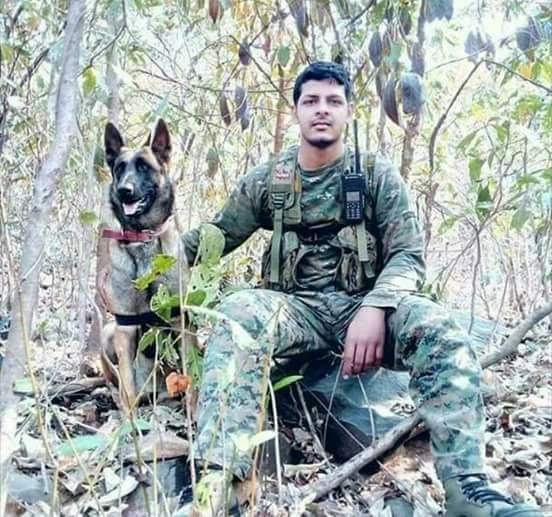 Besides these known breeds with strong lineage, local and stray dogs also play a crucial role in the Indian army. These are local dogs which are adopted by the army unit based there, they feed and look after these dogs. Such dogs have proved their mettle in detecting the movements of infiltrators and providing early warnings. Their presence also neutralized and dulls the effect of isolation on the soldiers deployed at forwarding posts. 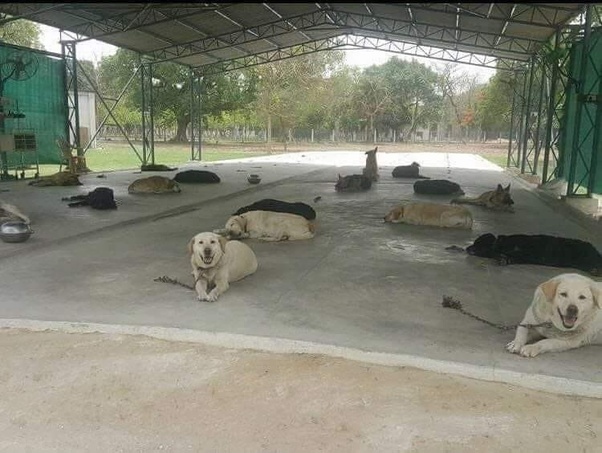 Indian Army also earlier euthanasizes (Mercy Kill) Military Dogs after their retirement from active military service. There was a huge outcry over this when it was revealed through the RTI Act. After a public outcry, this move was taken back except for those cases where the canine is suffering from an incurable disease. Now the retired Army Dogs can be adopted after their retirement where they are kept at Meerut Cantonment for rehabilitation. At Rehabilitation Centres, these Dogs had little to no scope for physical activities and hence many people especially dog-lovers are carrying the message to adopt a military Dog and take home a national hero. 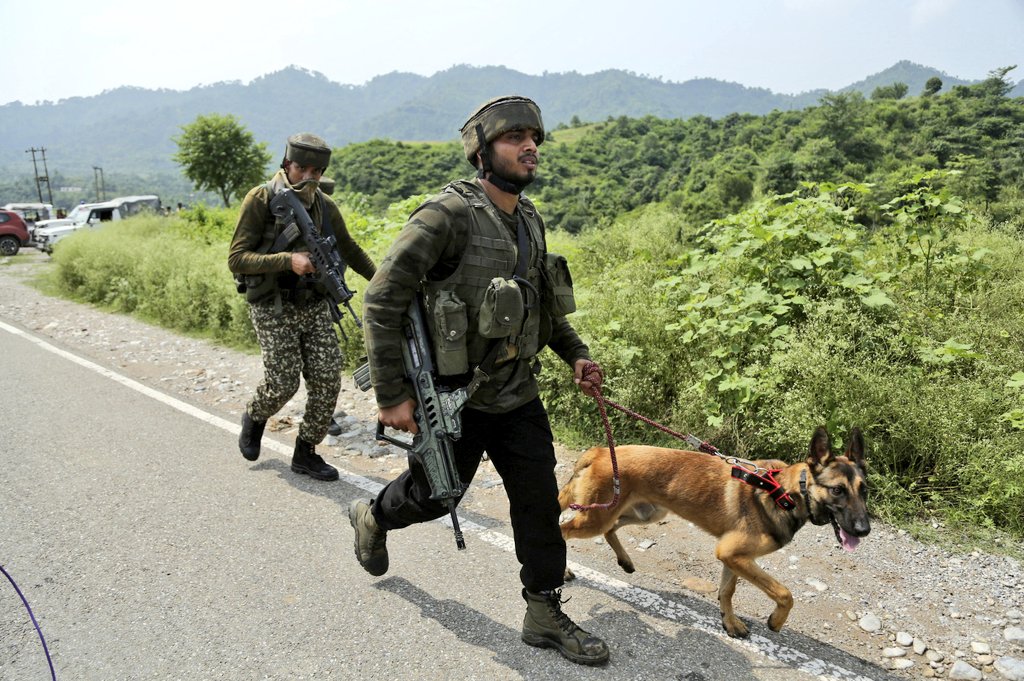 Countries like USA, England, Belgium, Netherlands all have dedicated monuments and memorials for those war dogs who were martyred on the line of duty acting with utmost devotion and loyalty. I sincerely hope that India should also duly honour these War Dogs who have proved their mettle on the Battlefield not only as Partners or Mascots but also as a brother in Arm who equally serve their nation as any other warrior under the flag.

As John Grogan once said, “Many of the qualities that come so effortlessly to dogs—loyalty, devotion, selflessness, unflagging optimism, unqualified love—can be elusive to humans.”